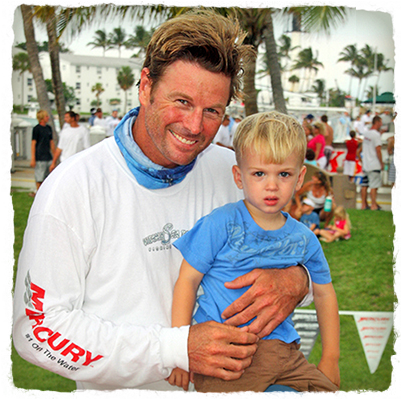 I was born in Garden City Long Island New York. I am 42 years young. Our family moved just after one year old down to Wilton Manors and eventually to Bel-Air in Pompano Beach where the fishing bloomed. We grew up directly across from the beach where that was our playground. I played all the sports including volleyball, Football, skiing, you name it but fishing was the top that the kids did in the neighborhood. My cousins Tim and Cliff Maddock came down from Long Island and lived five minutes away. We fished in the canals and intercostals for snook, tarpon, jacks and anything that would bite. Fishing the beaches and piers, the famous mullet runs where catching dozens of snook and tarpon with some in the high 100 lb range and the Florida Keys trips. You name it and we couldn’t get enough. I attended Cardinal Gibbons High School, played Pro Volleyball (AVP) for 3 years knowing that endurance and self structure was important to success. At 15 was introduced to modeling with Irene Marie Modeling agency. Modeling started slow but at 18 after high school was asked to leave for Europe, left for Paris France and ended up touring every Continent except for Asia and Australia. During that time spent a year in South Africa. This was important because in this industry you have be smart and know how to market yourself that leads to market recognition and success in the business. I am still a Professional Model/Actor with a long resume and shot with the most successful Supermodels and photographers in the world. Done 1000’s of pictures for top Editorial Magazines, Catalogs and National ad campaigns for Budweiser, Bass Pro, Casual Male, Kingsize, Gillette, Avis, Coors Light, Labott’s, Wrigley’s, Hertz, Carnival Cruise lines, Gianni Versace, Armani and Goodyear to name a few. To date have shot over 100 National and International Television commercials, two television series and two movies. I know what it takes to see a company make an investment into a person that will get the maximum exposure and professionalism.

I am married to my wife Stephanie and have my two amazing kids Jasmine who is 15 and my Future Hall of Famer Tyler who is 5. I also work for one of the largest diamond tool companies in the country called World Diamond Source and  run a fishing Charter business called Next Episode Charters that keeps me on the water and fine tuned for the Tournament season.

From a fishing standpoint I have fished professionally for over 22 years and been a part of some of the top fishing teams in the industry. Personally have had World Records on and missed a few by pounds. The most important in a successful team is the ability to work like a tight machine that is firing on all cylinders. Minimizing any mistakes and when one is made to be able to correct it immediately. I have been a part of the Vitamin Sea and Vitamin Sea Too fishing teams that are run by my two cousins Cliff and Tim Maddock. Since growing up as kids together you know what ones ability is and the way each other work. I have fished countless tournaments through out Florida, the Bahamas, Virgin Islands, South Africa, California and Mexico. With Vitamin Sea Too, we have won many tournaments we have set records in the United States. I have been a part of one of the most successful fishing teams on the water and proud to be a part of this team. The reason for success is the mental and physical preparation of the team followed by a structure that ultimately leads to success and to stand up on the stage over all the other boats. The Vitamin Sea Too team has worked together for many years and know what it takes to be a winner. Our team won the most money in a Sailfish tournament by winning the World Sailfish Championship in 06’. We did this by taking the first and second day dailies and the overall for the tournament. Plus, we did this in a center console boat.  This year we pre-fished for the World Sailfish Championship in Key West and set the new US record for the most sailfish caught in one day. Everyone on the team has their job, does it well and knows that we have each others back.