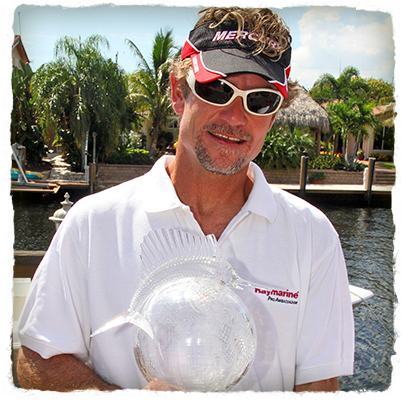 I have been fishing virtually as long as I have been breathing.  I was born in Long Island New York and have been on the water my entire life.  We moved to South Florida when I was seven years old.  From tarpon fishing in local canals to marlin fishing in Australia, I have literally done it all.  Part of my passion for the sport comes from my father’s love for it, who passed away from cancer at only forty years old.  After burying him at Calverton National Cemetery, I stayed in New York for a few years and freelanced on several boats.  One thing led to another and before I knew it I was back in South Florida.  These jobs kept me on the water and that was all that mattered.  The fact that my kids love it too and I can share it with them has made it a lifestyle for all of us.

I bought my first boat in October  of 1992 and two weeks later was accepting a trophy for second place boat and top overall angler in the Fort Lauderdale Billfish Tournament.  I fished the tournament circuit in South Florida intensely from 1992 until 2002, in that time I won the prestigious Triple Crown award six times.  To date, I am the only person to ever achieve this honor.  The point came when I felt I had reached the top of my game with the local pelagic tournaments and my team and I began travelling and fishing tournaments internationally.  After winning in Venezuela (several times!), St. Thomas, Australia, Bahamas… it was time to come home and conquer the local market.   We won the 2006 World Sailfish Championship, the first time we fished it, in a center console boat.  It started becoming clear to us that the sky is the limit!  In 2009 we caught and released fifty sailfish in one day, setting a new US record.

Professionally, I am the VP of World Diamond Source.  My brother Cliff and I have been in the diamond blade industry for over twenty years and we have had World Diamond for fifteen.   We are truly a family company, with both of our sisters and two cousins with us as well.  I have cultivated and developed the relationships with some of our largest customers, and continue to be on the front edge of research and development for new industries and applications.  Many of these relationships have turned into friendships, and we have often taken customers on fishing trips and created memories and experiences they will not soon forget.

I want to thank each member of my fishing team for making it possible for all of us to be living this dream.  My fishing team is like a well oiled machine, each member with a critical function.  With our combined passion and commitment I truly believe there is nothing we cannot do, and I look forward to all of it!  Tight lines!